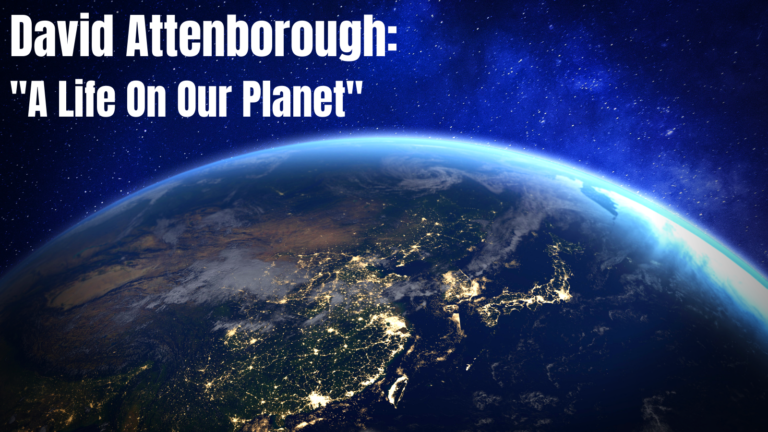 The latest documentary by David Attenborough, “Life On Our Planet”, which has been available on Netflix since the 4th of October, gives us his own personal witness statement of life on Earth. We have compiled a list of facts we have learned from the documentary that demonstrate the radical change to global biodiversity and actions we can take.

As with all his documentaries, it left us glued to our seats with our jaws dropping from start to finish due to its stunning cinematographic beauty and David’s truthful but stark informative details. The account begins with stone cold facts and journeys on through David’s life informing us of the destruction that has been caused over his 94-year lifetime. Although it brings us to moments of despair when we witness the obliteration that has occurred to the world’s biodiversity, we are left hopeful and guided through the changes we can make to reverse this destruction. The following is a list of phenomenal facts we have learnt from this documentary and what we can do to change the course of action.

The white ice in the Arctic reflects the sun’s heat which prevents the Earth from getting to unbearably high temperatures. The vast rainforests trap heat and carbon in the air creating a cooling moisture. The vast plains of the Serengeti are kept fertile by the hordes of Wildebeest grazing on the land. It’s the circle of life. Every species plays a role. The wilderness allows us to breathe and live under bearable conditions. We depend on freshwater, food and fuel sources to live. Biodiversity loss can have an impact on our health and livelihoods and can even indirectly affect global migration and cause political conflict. We must protect it to survive. As David mentioned, to restore global stability, we must “restore biodiversity”.

2. 3 Trillion Trees Have Been Cut Down Worldwide

According to the documentary, 15 billion trees are cut down each year. Trees are our lungs, they trap the carbon in the air and emit oxygen that we can breathe. We must bring deforestation to a complete halt and plant more and more trees to offset the world’s carbon.

3. Half Of The World’s Rainforests Have Been Cleared

Trees are our lungs, but rainforests are the Earth’s lungs. Rainforests are being cleared to make use of the timber and then to clear land for farming. Rainforests keep the planet stable and healthy by regulating the composition of the atmosphere, offsetting the effects of climate change, keeping soil fertile and providing us with water sources.

Coral bleaching occurs due to the whitening or degradation of the coral’s pigment due to it releasing its symbiotic algae that it holds inside. As David mentioned, these white corals are essentially their “skeletons” and create underwater wastelands. As water temperatures increase, coral bleaching intensifies. If rainforests are the Earth’s left lung, then coral reefs are the Earth’s right lung. They have soaked up 90% of the extra heat created by greenhouse gases. The Great Barrier Reef in 2020, has seen the third mass bleaching event in five years.

As mentioned before, this ice reflects the sun’s heat and prevents overheating. The seas and oceans do not have the capacity to withstand this melting ice, which can lead to increased flooding.

6. Global temperature has increased by 1 degree

Since the year David was born, and as technology and the world continuously evolve, the average temperatures worldwide have increased by one degree Celsius.

7. 30% of fish stock has been overfished to critical levels

Overfishing and poaching have led to the depletion of various types of fish. No fishing zones are allowing species to flourish, which also prevents coral bleaching.

8. Freshwater populations have reduced by 80%

According to the Intergovernmental Science-Policy Platform on Biodiversity and Ecosystem Services (IPBES) Report, one million animal and plant species are being threatened with extinction.

9. ½ all fertile land is made up of farmland

Trees are cut down for farmland, interrupting with the ecosystem of that area. 77% of the world’s farmland is dedicated  to livestock. Erosion and the degradation of soil is occurring due to the continual ploughing of fields, the heavy use of fertilizer and the pollution that is created by raising livestock.

10. 70% of all birds are domestic birds, the majority being chickens

With deforestation, the populations of birds from the wild is decreasing.

Humans account for over ⅓ of living things, mammals we raise to eat account for 60%, and everything else accounts for only 4%. The world is becoming overpopulated and it is losing its wilderness. According to the documentary, we can reverse this by

As David Attenborough said in his documentary, “Life On Our Planet”, we can only thrive if everything around us thrives. In that way we must make a conscious effort to help nature continue to thrive. “If we take care of nature, nature will take care of us”.

5 Ways You Can Reduce Your Food Waste
Electronic Waste: What Is It And How Do We Dispose Of It?