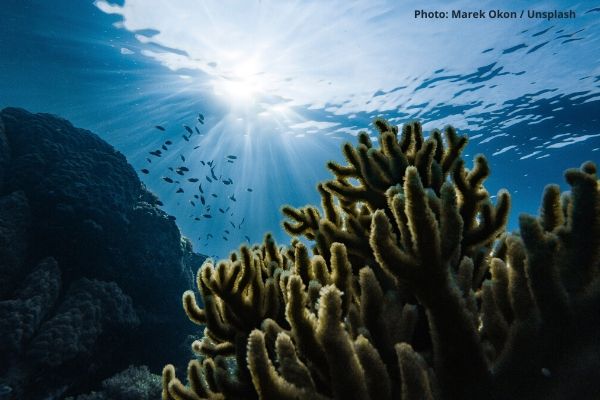 To celebrate World Oceans Day, which is today 8 June 2020, we’ve put together a list of some incredible facts to inspire you to do everything you can to protect them.

More than 70% of our planet’s oxygen is produced by our oceans. In fact, it’s the marine plants, nearly all of which are marine algae, that give us the fresh air that we breathe. A little food for thought the next time you squeal because you hit some seaweed on your swim!

One Antarctic iceberg could supply a million people with drinking water for five years. And crazy as it may seem, one man is actually making plans to tow an iceberg to South Africa to address the water crisis there.

Our oceans soak up 30% of CO2 emissions that humans create. If it wasn’t for the sea, we’d be in an even bigger mess than we already are. But the oceans can’t take much more. Unfortunately, as the ocean absorbs more and more carbon dioxide from the atmosphere, it becomes more acidic which makes it harder for living creatures like coral to survive.

The sea is home to the world’s largest living structure – the Great Barrier Reef off the coast of Australia. The reef spreads out over an area of 133,000 square miles. That’s about the size of Italy and this incredible living system can even be viewed from space. Sadly, the reef is struggling to survive due to climate change. Rising sea temperatures and pollution make the coral susceptible to bleaching and eventual death. Tourism can also play a role, with swimmers and divers touching and damaging parts of the reef as well as leaving behind rubbish and contaminating the waters with sun cream and other pollutants.

It’s not just sea creatures that depend on a healthy ocean for their survival. Approximately 3 billion people depend on the oceans for their livelihood. Plastic and climate change are amongst the threats to the health of our oceans.

Plastic is found in all the world’s oceans. In one particular spot – the Eastern Garbage Patch – there’s a swathe of plastic rubbish that’s twice the size of Texas. This plastic waste has entered the food chain now and scientists say that plastic is contributing to obesity, infertility and worse.

An incredible 94 % of the Earth’s living species exist in our oceans. With all of this life down there, and given that we are experiencing a biodiversity crisis, it’s high time we take a keen interest in the oceans around us.

The ocean is the largest solar energy collector on earth, according to National Oceanic and Atmospheric Administration. The proliferation of greenhouse gases prevents heat from escaping our planet’s atmosphere, and all that energy has to go somewhere. And guess what? It goes straight into the oceans. As a result, ocean temperatures have rapidly risen over the past few decades.

According to the NASA’s Jet Propulsion Laboratory, if all of the glaciers and sheets of Arctic sea ice melted at the same time, the sea level would rise an estimated 262 feet, which is about the height of a 26-story building—just a bit shorter than the Statue of Liberty.

So what can to protect our oceans – and ourselves?

Visit the World Ocean’s Day website to learn more ways to protect our oceans and don’t forget to sign the petition that calls on world leaders to protect 30% of our oceans by 2030.